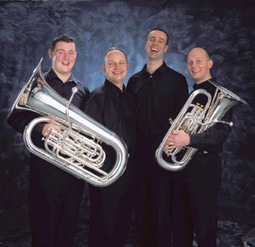 In existence for over 25 years, Tubalaté has become one of the UK's leading low-brass ensembles. The group's dynamic performances, coupled with unrivalled virtuosity and variety always manages to astound listeners.

raffle in aid of piano hire next season

For more than 25 years Tubalaté has been one of the UK’s leading professional brass ensembles. The first ever tuba-euphonium ensemble to graduate, and be awarded the prestigious Professional Performance Diploma from the Royal Northern College of Music, Tubalaté has been at the forefront of instrumental and repertory development. Their wide range of styles and flexibility of performance has gained them an international reputation for promoting the dynamic development of brass chamber music, regularly presenting familiar music contrasted with exciting new commissions and generating a repertoire that is innovative and unique.
Formed in 1991, the ensemble regularly performed for ‘Live Music Now!’, a UK-wide initiative founded by Sir Yehudi Menuhin, designed to take music to all parts of the community, including schools, special educational needs settings, prisons, care homes and hospitals. Several seasons at Legoland, Windsor enabled the group to hone their skills and create programmes suitable for all ages! Tubalaté has developed several highly successful education programmes ranging from the inter-active ‘Music in Motion’, the group’s own version of The Carnival of the Animals entitled “I saw a Snake” , the compositional based “4Chords” and Tubalaté MASH – a workshop designed to develop areas of the literacy syllabus. The ensemble have also commissioned a concerto grosso, for Tubalaté, children’s choir, community ensemble and electronic media entitled “The Origins of Fire” by the artist, composer and writer, Michael Szpakowski. Tubalaté continue to encourage educational projects, working in collaboration with organisations such as the Society for the Promotion of New Music (SPNM). The quartet also work as tutors and directors with the annual DMC ‘Music Mania’ Summer School. Tubalaté travel worldwide, playing to audiences in Russia, Latvia and the USA, as well as throughout Europe. The ensemble has also performed at many of the UK’s leading venues, including the South Bank, the Barbican, the Waterfront Hall (Belfast), the Bridgewater Hall, Birmingham Symphony Hall and made several appearances on radio and television. In 1998 Tubalaté received a royal accolade, performing at Buckingham Palace for Prince Charles’s 50th birthday celebrations, hosted by the Queen.
The ensemble has given masterclasses at major music conservatoires including the Royal Northern College of Music, Liverpool Institute for Performing Arts, the Welsh College of Music and Drama and the St Petersburg Conservatoire (Russia), Riga Conservatoire (Latvia) and the Franz Liszt Academy of Music (Hungary).