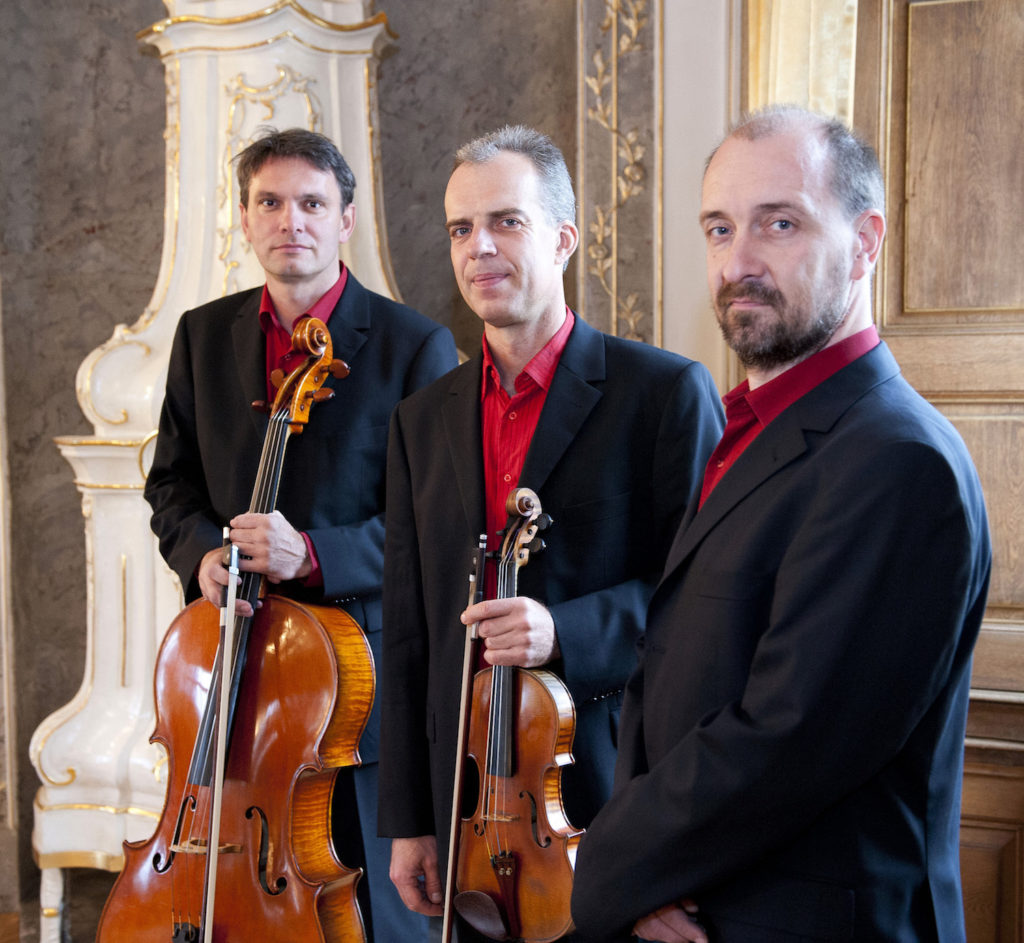 Trio Martinů from the Czech Republic treated us to a sensational concert in 2017. They return to Sandbach to present a programme which includes works by Martinu and Beethoven.

Under Professor Antonín Kohout (a member of the Smetana Quartet) at the Academy of Performing Arts in Prague, the ensemble developed and embarked on a trajectory paved with success and awards. These have included being semi-finalists in the international competition at Trapani, Italy; third price in the international contest of chamber ensembles at Heerlen, The Netherlands in 1992, which was followed by winning this competition three years later, in 1995.

Trio Martinů has taken part in several series of master classes: at Villecroze, France, conducted by Prague Trio (1992 and 1994), and at the Orlando Festival in Kerkade, the Netherlands, under Sandor Devich and Menahem Pressler, a member of the Beaux Arts Trio (1995 and 1997). From 1996, the ensemble studied for two years at the Vienna Hochschule für Musik under Professor Michael Schnitzler, a member of the Haydn Trio.

In 1995 the ensemble received the annual Award of the Czech Chamber Music Society (CCMS) attached to the Czech Philharmonic Orchestra.

Since then, the Trio has toured many countries (mainly Spain, Belgium and the Netherlands), Japan (2005) and lately Korea in 2015, where they represented the Czech Republic at the Euro-Asian Chamber Music Festival with recitals in Seoul, Daegu and Busan. In our country the Trio performed at all famous festivals, for example the Prague Spring (1999, 2014), the International Festival of Chamber Music in Český Krumlov (2014), Bohuslav Martinů Fest in Polička (2014), Janáček May Festival in Ostrava (May 2016), and some others.

The Trio´s discography encompasses both studio and live recordings. Their last 2 CDs were released in 2013, one by the German company Musicaphon with trios by P.I. Tchaikovsky (Piano Trio in A Minor, op. 50) and Bohuslav Martinů (Trio in D Minor). The second CD with works by L. van Beethoven was recorded live and contains his Triple Concerto which Trio Martinů performed with the Prague Symphony orchestra led by the Chinese conductor Muhai Tang.

In autumn 2015 Trio Martinů celebrated their 25th anniversary, mainly by special concerts in the Prague´s Rudolfinum and then in Besední dům within the chamber series of Brno Philharmonic.

All the three members are outstanding soloists and record regularly for the Czech Radio. Pavel Šafařík and Jaroslav Matějka have been engaged in the Prague Symphony Orchestra as assistant leaders for many years, and Petr Jiříkovský, except his solo performances, teaches piano at the Prague Conservatory.