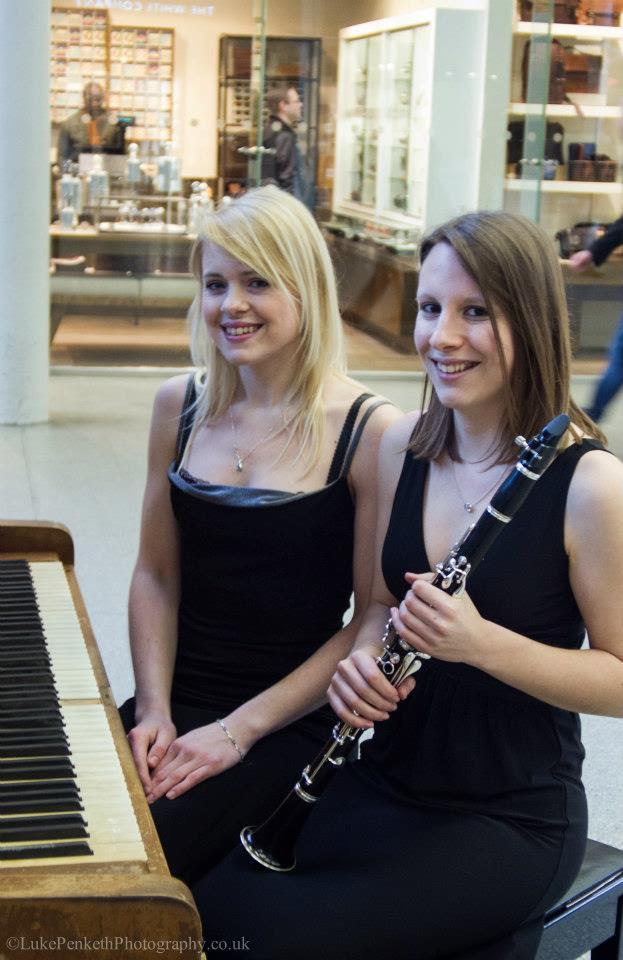 This special evening of virtuosic and lyrical favourites for clarinet and piano includes Gershwin’s Rhapsody in Blue, Adagio from Mozart’s Clarinet Concerto and a pair of Schubert Impromptus.

raffle in aid of Diabetes Care

Sarah Douglas and Amy Wakefield are an excitingly combined clarinet and piano duo. They grew up in Stockport have performed together since childhood as they attended the same primary school and Chetham’s School of Music. As a duo, they play in recitals around the UK and are sought after guest artists for international cruise contracts. Recent concerts include recitals at the Buxton Opera House Arts Centre and The Georgian Theatre Royal.

Sarah studied at the Royal College of Music where she won the Henri Selmer Paris Clarinet Prize and the Stephen Trier Award. She was supported by the Anne Driver trust, a Neil VintBursary and won a Philharmonia Orchestra Martin Musical Scholarship. She has worked with The London Concert Orchestra, The Bournemouth Symphony Orchestra, Royal Ballet, KZN Philharmonic (South Africa), Brit Award winner Duffy, Pink Floyd’s Symphonic Live and has played on BBC Radio 3 and Radio 1’s Live Lounge. Sarah plays regularly with OperaUpClose, who won an Olivier Award for Best Opera and also works as aninstrumental teacher and ensemble coach.

Amy studied the piano with Susan Bettaney at Chetham’s and also studied the violin. Amy received a scholarship to the Birmingham Conservatoire and went onto study with the Head of Piano, Malcolm Wilson and Victor Sangiorgio. She now works a Freelance Pianist and teacher. Amy is on the management committee for EPTA UK  (European Piano Teachers’ Association) and enjoys writing articles/book reviews for the magazine ‘Piano Professional’. She has delivered masterclasses in London and manages the social media for EPTA UK. As a violinist, Amy regularly plays in local orchestras/ensembles and works as a session musician. Amy has recently become a mentor on the ESTA Strings CME course at Chichester University and has successfully built up her own private teaching practice in Congleton.