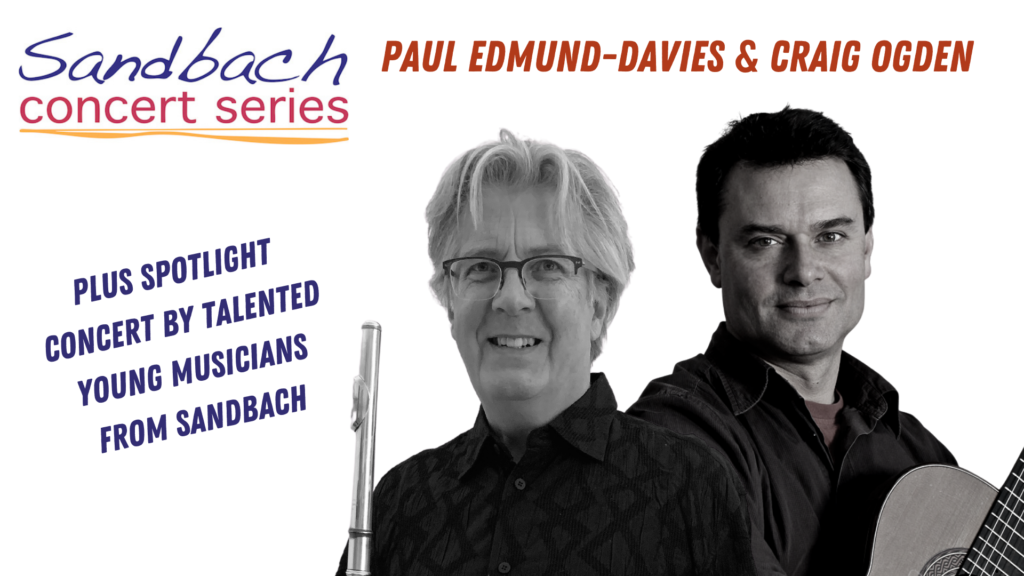 Soloist, Symphonic player, Internationally renowned teacher and performer on numerous Hollywood film scores from Star Wars to the James Bond movie ‘No Time to Die’, Paul Edmund-Davies is still trying to discover what he wants to do when he finally grows up. Paul is joined by the brilliant guitarist Craig Ogden in a concert of delightful music for flute and guitar.

Paul Edmund-Davies established his international reputation as flautist and soloist in the 20 years that he was Principal Flute of the London Symphony Orchestra and then the five years in the same position at the Philharmonia Orchestra. Conductors with whom he has performed concerti include Leonard Bernstein, Rostropovich, Pierre Boulez and Kent Nagano and he has played in Chamber Music ensembles with André Previn.Paul has toured extensively, giving recitals, classes and performing concerti in America, Europe, Canada, Australasia, the Middle East and the Far East.

Paul has also co-written and performed on cross-over projects with Neil Percy, Principal percussionist with the LSO. Their disc, Ball and Biscuit, was released in 1999 on the Black Box label. Their latest disc, Cuvée Acoustique was released in May 2006 and a play along version for one or two flutes (Flute Fusions) was published by Kevin Mayhew in January 2007, giving flautists the opportunity to experience different styles and rhythms from around the World.

He has also edited several books of music entitled The Flautist’s Collection and has completed editing and recording the complete Flute Sonatas of J. S .Bach and G. F. Handel (consisting of score, parts and CD with complete performance and play along version) the Telemann Fantasias, the two unaccompanied Partitas by J. S. and C. P. E. Bach and the Canonic Sonatas and Sonatas for two flutes by Telemann and editions of the complete flute works of the hitherto uncelebrated Giuseppe Rabboni.

In June 2007 his latest book, ‘The 28 Day Warm up Book for all Flautists………..eventually!’ was published. This 150 page volume with four sections on Sonority, Fingers, Articulation and Intervals is entirely original and in a logical and musical way helps to address and solve numerous playing related issues. It is now in its second edition.

Paul has performed on more than 50 film sound tracks, including classics such as Star Wars (episodes 1 and 2), Aliens, Braveheart, Harry Potter, Who framed Roger Rabbit? and Honey I shrunk the kids. When not playing the flute, he is also a director of The Champagne Guild, a company devoted to introducing previously unavailable Champagnes into the United Kingdom.

Australian born guitarist Craig Ogden is one of the most exciting artists of his generation. He studied guitar from the age of seven and percussion from the age of thirteen. In 2004, he became the youngest instrumentalist to receive a Fellowship Award from the Royal Northern College of Music in Manchester.

One of the UK’s most recorded guitarists, his recordings for Virgin/EMI, Chandos, Nimbus, Hyperion, Sony and Classic FM have received wide acclaim.

Craig Ogden has performed concertos with many of the world’s leading orchestras. In recent seasons he has performed with the Hallé, BBC Concert Orchestra, Orquesta Sinfónica de Navarra (Spain), Spanish Symphony Orchestra, RTÉ Concert Orchestra (Dublin), London Philharmonic, Ulster Orchestra, Orchestra of Opera North and the Royal Liverpool Philharmonic.  In 2015, Craig was asked at short notice to step in for the indisposed Miloš Karadaglić to perform a series of concerts with the Royal Northern Sinfonia at major UK concert halls and again in 2016 with the Royal Northern Sinfonia and the English Chamber Orchestra, both tours receiving critical acclaim. This season Craig performs concertos with orchestras including the Hallé, London Mozart Players, Manchester Camerata, English String Orchestra and the Darwin Symphony Orchestra, Australia. Craig enjoys performing new works for guitar and gave the world premiere of a concerto written for him by Andy Scott with the Northern Chamber Orchestra in Manchester in November 2017, followed by the Australian premiere in Perth in September 2018. He gave the world premiere of ‘Il Filo’, a double concerto for guitar and accordion by David Gordon with Miloš Milivojević in summer 2019 and composer David Knotts is currently writing a concerto for Craig.

Craig Ogden regularly appears as soloist and chamber musician at major venues, collaborating with many of the UK’s top artists and ensembles. He is a regular member of the London Tango Quintet. Craig has been invited by John Williams to perform with him at venues including London’s Globe Theatre, where he returned for a music and poetry performance with actress Meera Syal and he performed as part of the Michael Tippett concert series at Wigmore Hall, returning there with the Nash Ensemble.  Craig has performed chamber music concerts at the Australian Chamber Music Festival at the invitation of Piers Lane and in September 2019 he performed a new programme with the Syrian qanun player Maya Youssef for Equator Festival Music at Kings Place, London. Craig also frequently records for film and was featured on the British hit, Notting Hill. He has presented programmes for BBC Radio 3, BBC Northern Ireland and ABC Classic FM (Australia).