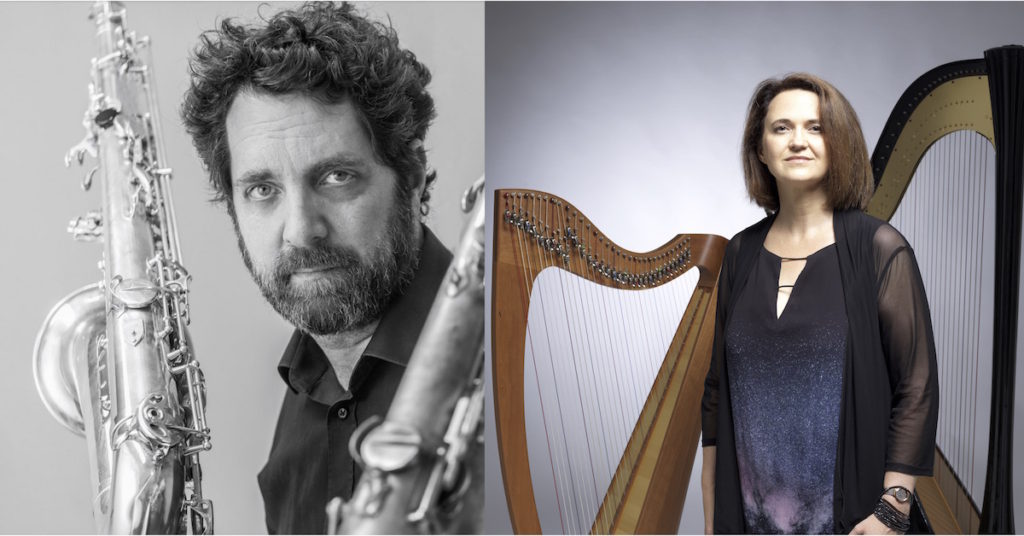 Harp and Saxophone concert by Lauren and Andy Scott

Free Running by Lauren Scott
Farewell to Stromness by Peter Maxwell Davies
Away for a While by Monika Stadler
Celestial Spirals by Lauren Scott
Saxon Place by Andy Scott (world premiere)
And Everything is Still by Andy Scott
The Wayfaring Stranger – Traditional arranged by Andy Scott (world premiere)
Casadh an tSugain – Traditional arranged by Daniel Whibley
LAUREN SCOTT fell in love with the harp aged four after seeing a historic lever harp in a museum in Australia. After two years of pestering her parents she began harp lessons aged six when her family moved back to England. Lauren studied harp at Trinity College of Music and has a busy portfolio musical career.  As an established and in demand freelance player, she plays guest principal harp with many of the UK’s leading orchestras and chamber groups as well as pursuing her own projects. Her harp playing has led her to performing in venues across the UK from the Royal Albert Hall to West End shows to commercial recordings to live broadcasts on radio and TV.
Lauren Scott has recently embarked on a creative compositional journey having only started writing music in 2018. Since then she has published two volumes of music for lever harp, her music has received praise from harpists and harp societies worldwide and she has had four of her pieces set on the Trinity grade syllabus. In January 2020 she was a recipient of a PRS Foundation Women Make Music award to compose new harp ensemble music for her project, Harps Across the North. In March 2020 her debut solo CD, Beyond the Horizon which features eight of her compositions alongside works by Peter Maxwell Davies and John Cage was released on the Avie Records label.
Over the last 20 years Lauren has worked as guest principal harp with Royal Liverpool Philharmonic Orchestra, Royal Scottish National Orchestra, Hallé Orchestra, BBC Scottish Symphony Orchestra, BBC Concert Orchestra, BBC Symphony Orchestra, ​City of Birmingham Symphony Orchestra, Manchester Camerata, Royal Northern Sinfonia, Scottish Chamber Orchestra, Britten Sinfonia, Ensemble Cymru and is the regular harpist with the Picture House Orchestra, Northern Chamber Orchestra and Psappha Contemporary Music Group.​

Andy is a multi-nominated and British Composer Award winner, a founder member of the Apollo Saxophone Quartet (est.1985), Tutor of Saxophone & Visiting Tutor of Composition at the Royal Northern College of Music, equally at home free improvising with Duo partner percussionist Dave Hassell, to leading and writing for his Group S & performing and arranging for the Super Big Tramp Band/John Helliwell.