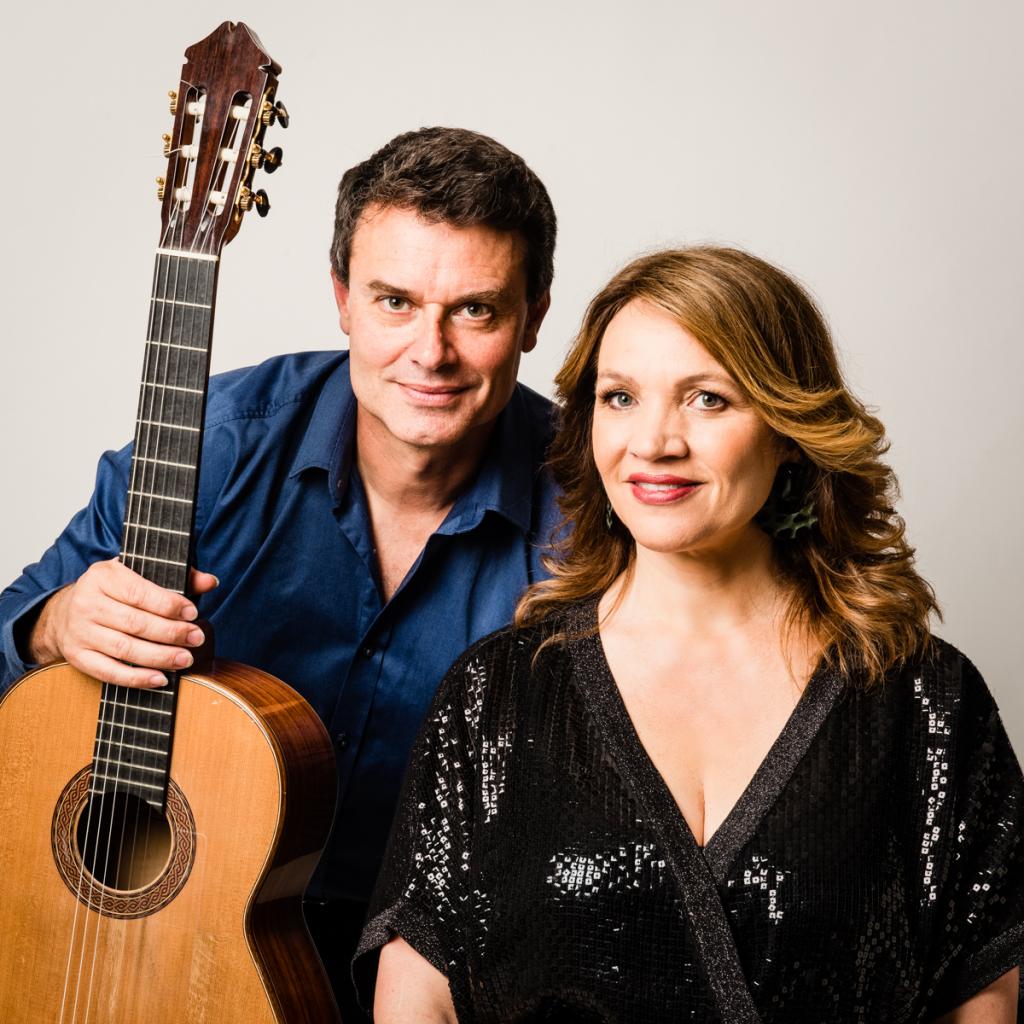 **Please note – this concert will be in the church**

A welcome return to Sandbach for Craig Ogden, this time showcasing a fantastic new collaboration with vocalist Jacqui Dankworth which includes new arrangements of songs by Burt Bacharach, Jerome Kern and others.

Jacqui Dankworth, “One of our finest singers regardless of category” The Times “Mr. Ogden…proved a polished soloist in colourful, technically demanding works”

I Do It For Your Love     Paul Simon arr. Craig Ogden

How Do You keep The Music Playing      Michel Legrand arr. Craig Ogden

A House Is Not A Home     Burt Bacharach arr. James Girling

Jacqui Dankworth is one of the most highly regarded vocalists in the UK. Her concert appearances and her stylistically diverse recordings showcase her virtuosic, seemingly effortless mastery of a wide spectrum of genres.  Known primarily as a jazz singer, Jacqui’s unique musical palette also draws on folk, soul, classical, blues, and numerous other influences. Reviewers have described her as “incomparable”, “multi-faceted” and “…one of our finest singers, regardless of category.” (Sunday Times)
Jacqui’s most recent CD, Live To Love, has garnered rave reviews and features many of her own original compositions. Recent concert appearances have included New Year’s Eve 2014 with the Liverpool Philharmonic, a special performance of her “Songs Of Stage and Screen” programme with the RTÉ Concert Orchestra, Cadogan Hall in London with members the RPO and the BBC Big Band, and as guest vocalist on Radio 2’s Friday Night Is Music Night.  In 2013, Jacqui appeared as Eleanor in The Opera Company’s new production of Alben Berg’s Lulu (entitled “American Lulu”) with the London Sinfonietta.  Tour dates included the Edinburgh Festival, the Bregenzer Festspiele in Austria, and the Young Vic in London.  Recent television appearances include live performances and interviews on BBC Breakfast, the Paul O’Grady Show, and The One Show.  Jacqui is constantly touring and performing with her own band throughout the UK and is currently at work on her next album, to be released in 2016.
Jacqui is also an accomplished actor, having performed leading parts with the Royal Shakespeare Company, the National Theatre, and in London’s West End.  Highlights include the part of Cinderella in Steven Sondheim’s London premier of Into The Woods, Sophisticated Ladies (a celebration of the music of Duke Ellington) and Les Liaisons Dangereuses with the RSC.  In 2012 Jacqui appeared as Rosa in the second series ofThe Borgias starring Jeremy Irons (Showtime TV) and made a cameo appearance in the film Les Miserables directed by Tom Hooper.
Jacqui has performed and recorded with a diverse array of celebrated musicians, including the Brodsky Quartet, Courtney Pine, Marvin Hamlisch, Paloma Faith, Alan and Marilyn Bergman, Gretchen Parlato, Clare Teale, Georgie Fame, David Gordon, Charlie Wood, Gregory Porter, The London Symphony Orchestra, and legendary jazz pianist Chick Corea.
“Jacqui Dankworth doesn’t confine herself to singing jazz; she is gracefully at ease in folk music and semi classical contexts, as well as being an imaginative interpreter of standards. But in all her incarnations, she exhibits a subtle control of dynamics and a voluptuous tonal richness that seems to make almost any material sound special.”
– John Fordham (The Guardian)

Craig Ogden – classical guitar
Australian born guitarist Craig Ogden is one of the most exciting artists of his generation. He studied guitar from the age of seven and percussion from the age of thirteen. In 2004, he became the youngest instrumentalist to receive a Fellowship Award from the Royal Northern College of Music in Manchester.
One of the UK’s most recorded guitarists, his recordings for Virgin/EMI, Chandos, Nimbus, Hyperion, Sony and Classic FM have received wide acclaim.
Craig Ogden has performed concertos with all the main UK orchestras plus many abroad – in recent seasons he has performed with the Philharmonia, London Philharmonic, Manchester Camerata, Ulster Orchestra, Hallé, Bournemouth Symphony, WDR Rundfunk Orchestra (Cologne) and the Aalborg Symphony Orchestra (Denmark). In December 2015, Craig was asked at short notice to step in for Miloš Karadaglić who was unable to perform due to his hand injury – Craig performed the series of concerts on tour with the Royal Northern Sinfonia at major UK concert halls to critical acclaim. Craig was asked again to step in at short notice for Miloš for his UK concerts in winter 2016 with the Royal Northern Sinfonia and the English Chamber Orchestra, taking on the challenge of learning nine new pieces of music in one week. This season Craig performs concertos with orchestras including the BBC Concert Orchestra, Hallé, London Philharmonic, RTE Concert Orchestra (Dublin), Spanish Symphony, Royal Liverpool Philharmonic and the Orquesta Sinfónica de Navarra (Spain). Craig enjoys performing new works for guitar and gives the world premiere of a concerto written for him by Andy Scott with the Northern Chamber Orchestra in Manchester in November 2017, followed by the Australian premiere in Perth in September 2018. Composers David Knotts and Geoffrey Gordon are also currently writing concertos for Craig.
Craig Ogden regularly appears as soloist and chamber musician at major venues and collaborates with many of the UK’s top artists and ensembles. Craig has been invited by John Williams to perform with him at venues including London’s Globe Theatre, where he returned for a music and poetry performance with actress Meera Syal.  Craig performed as part of the Michael Tippett concert series at Wigmore Hall and returned there with the Nash Ensemble.  In July 2017, Craig performed several chamber music concerts at the Australian Chamber Music Festival at the invitation of Piers Lane and records a new album with vocalist Jacqui Dankworth, followed by live performances. Craig has presented programmes for BBC Radio 3, BBC Northern Ireland and ABC Classic FM (Australia).
Craig Ogden is Head of Guitar at the Royal Northern College of Music in Manchester, Adjunct Fellow of the University of Western Australia, Associate Artist of The Bridgewater Hall in Manchester, Curator of Craig Ogden’s Big Guitar Weekend at The Bridgewater Hall and Director of the Dean & Chadlington Summer Music Festival.