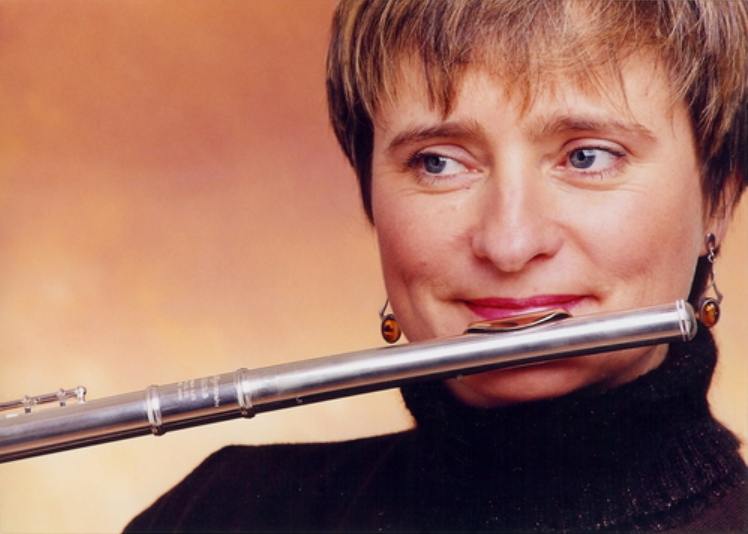 This concert has finished
See the Concert Report here

CLARE SOUTHWORTH enjoys a highly successful and varied career as performer, teacher and author, and is internationally acclaimed as one of the leading flutists of her generation. Clare’s many prizes include, International First Prize Winner of America’s National Flute Association Competition, and Prize Winner of the Madeira International Flute Competition. One of only a few flutists to have launched a successful career as a solo performer and teacher, Clare is in great demand to present concerts, masterclasses and workshops around the world. Her flute has taken her to Europe, America, and Japan and she has performed as guest soloist for the American, German and British Flute Societies. Clare was formerly Principal Flute with Aquarius, with whom she made several commercial recordings, and has worked with many leading orchestras, including the London Symphony Orchestra, Philharmonia, Halle and ECO. She has recorded two acclaimed CD’s, Sonatas and Classic Touch, with her accompanist Tim Carey and they have worked together as a duo partnership for 14 years.  Clare is recognized as one of the country’s leading flute teachers and was Professor of Flute at the R.N.C.M. for 17 years. She is now Professor of Flute at the Royal Academy of Music. Clare has always had a great deal of contact with young musicians, teaching for many years at RNCM Junior School, Chetham’s School of Music, Purcell School and many engagements on behalf of the National Flute Association Flutewise.  Clare is a Miyazawa International Artist.

LAUREN SCOTT has played the harp since the age of 6. After studying at Chethams School of Music and the special music course at Pimlico School, London, Lauren attended Trinity College of Music, studying with Sioned Williams and winning several solo performance awards. Lauren has worked extensively with many of the UKs leading orchestras, most notably the Royal Liverpool Philharmonic, Royal Scottish National, Halle, City of Birmingham, BBC Scottish and the BBC Symphony Orchestras. She has performed at major festivals like Edinburgh, Cheltenham and BBC Proms, and has toured, performed and recorded with chamber orchestras such as Northern Chamber Orchestra, Psappha, Northern Sinfonia and Britten Sinfonia. Lauren has played in West End shows, with artists such as Robbie Williams and Katherine Jenkins and also in venues as diverse as the Tower of London and HMS Illustrious. She also plays in “Duo Mandala” with Alison Stephens (which commissions new works for Mandolin and Harp, and has broadcast on Radio 4 and Classic FM) and their CD “Tapestry”, released on the Black Box label, was nominated for Editors Choice by Gramaphone magazine.