Rhythm of the Gods      Barbara Thompson 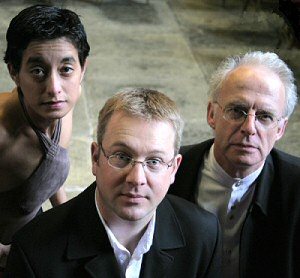 "Breathtaking virtuosity and energy. Each new piece leapt sparkling off the page and left the audience spellbound. From the softest whisper to a lion’s roar, this group’s range of colours and sounds has to be heard to be believed!"

In 1999, Rob Buckland, Simone Rebello & Peter Lawson, each established international soloists in their own rights, formed the Equivox Trio, and have since been drawing on their collective and individual musical experiences to create a unique musical soundworld that resonates with the open-minded audiences of the 21st Century. The vast number of instrumental combinations available to the group enables the Trio to present a programme of almost unparalleled sonic diversity and contrast, with each player and instrument maintaining its own identity whilst contributing to an incredibly complementary musical whole. In 2006 the Trio released its first CD, “The Time is Now” featuring music specially written and adapted for the group, to critical acclaim, and much of today’s programme is drawn from this CD, with a particular emphasis on jazz inspired works, from composers such as Jason Rebello (UK Jazz pianist, currently touring with Sting), Barbara Thompson (renowned UK saxophonist and composer), US Jazz legends Pat Metheny, Bob Mintzer and Chick Corea and solo pieces to open your ears to the extraordinary limits to which each instrument can be pushed in the hands of these master musicians.