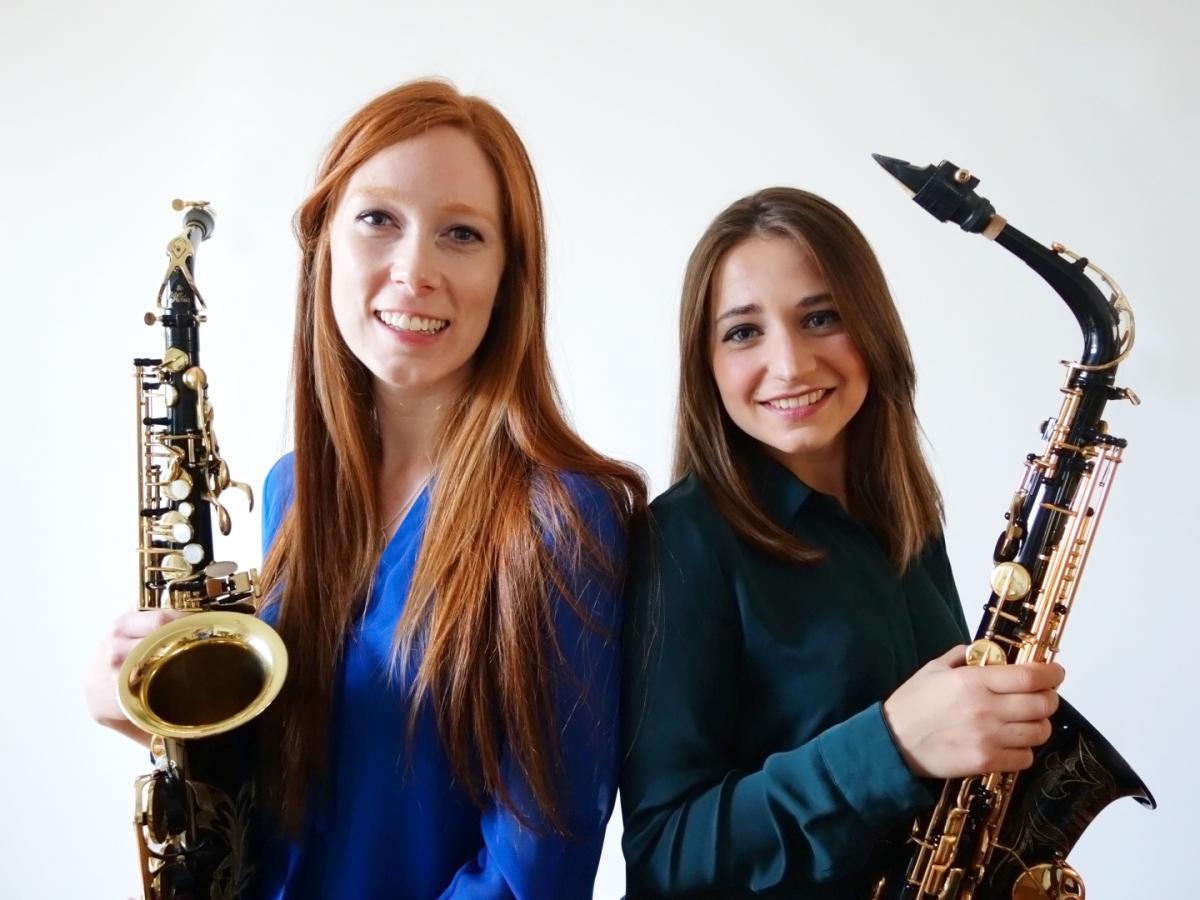 'Over 100 Years of Women and The Saxophone' is a project by saxophonist Amy Green and composer/saxophonist Charlotte Harding celebrating the pioneering female saxophonists, composers and bandleaders who were integral in developing their instrument, their art and their profession.With pianist Christine Zerafa.

raffle in aid of R.N.L.I

This was a popular vaudeville song included in the ‘Greatest Hits 1870-85 Variety Music Cavalcade’. It was written in Pennsylvania, where Etta Morgan and ‘The Berger Family Troupe’ lived and performed, and is an example of the type of popular song included in their programmes.

This piece was performed by Bessie Mecklem when she made the first ever recordings of the saxophone on Edison cylinders in 1892.

This was the most popular of Helen May Butler’s compositions and gained national recognition when it was adopted as the official march for Theodore Roosevelt’s election campaign in 1904.

Debussy wrote Rhapsodie pour Orchestre et Saxophone at the request of the Boston socialite Elise Hall. It remains one of the most important pieces in the saxophone’s repertoire.

Ivy Benson and her band performed this rip-roaring tune as part of a radio broadcast in Germany in 1947. The recording features the drum kit, with a swinging beat on the floor tom playing very loudly throughout!

‘Through this new work, I hope to highlight the inclusivity of the saxophone, celebrate the important contributions made by these pioneering women and explore the saxophone’s ability to cross all boundaries of genre and gender.’

Amy Green studied at the Royal College of Music, London, with Kyle Horch and Martin Robertson (2008-2014), and at the Paris Conservatoire with Claude Delangle (2013), graduating in 2012 with 1st Class Honours and in 2014 with Distinction in her Masters. She was awarded the Tagore Gold Medal, was the first saxophonist ever to win the Edward & Helen Hague Woodwind Prize and won the Melber Saxophone Competition. Amy has given recitals in London at the Royal Festival Hall, Royal Albert Hall’s Elgar Room, Cadogan Hall, St Martin in the Fields, St John’s Smith Square, the V&A Museum, National Gallery, Royal Academy of Arts, St. James’s Piccadilly and The Forge, Camden. She has also performed as a soloist in the BBC Proms Plus series broadcast on BBC Radio 3. Over the last few years Amy has given recitals throughout the UK as part of the Countess of Munster Trust recital scheme and was awarded the Making Music 'Philip and Dorothy Green Award for Young Concert Artists'. Amy made her Wigmore Hall debut in 2015 as a YCAT Finalist, and was a selected Park Lane Group Artist soloist for 2015/16. Amy is also an active chamber musician playing soprano saxophone in the Laefer Quartet (Park Lane Group Artists 2016/17), saxophonist in ANIMA, and orchestral work including the Royal Philharmonic Orchestra, BBC Symphony Orchestra, Royal Liverpool Philharmonic Orchestra, the Philharmonia, Bournemouth Symphony Orchestra, English National Opera and Rambert Dance Company. www.amygreensax.com

Charlotte Harding is a composer and saxophonist from East Yorkshire, England. She studied composition and saxophone at the Royal College of Music in London with Mark-Anthony Turnage and Martin Robertson having previously studied saxophone with Richard Ingham. On graduating she was awarded the prestigious ‘Queen Elizabeth, The Queen Mother Rosebowl’ as well as the Cobbett and Hurleston Prize for Composition. Charlotte enjoyed numerous premieres of works during her time at the RCM, a highlight being winning the RCM Concerto Competition with her work 'Fuse' for orchestra and drum kit, which was premiered by the RCM Sinfonietta. Charlotte has written works for a wide variety of leading ensembles and soloists, receiving performances internationally as well as at prestigious London venues such as Cadogan Hall, St Martin-in-the-Fields and the National Portrait Gallery. Recent commissions include ‘The Indicator Line’ for dance company BalletBoyz in collaboration with choreographer Craig Revel Horwood, which premiered at Sadler’s Wells this autumn and ‘Convo’, a massed ensemble work for the Triborough Music Hub to be premiered at the Royal Albert Hall in March 2019. She has written extensively for saxophone including ‘Voyage; A Concerto for Soprano Saxophone’ published by Reed Music and performed by eminent saxophonists Richard Ingham and Gerard McCrystal. Charlotte also writes music for media for various brands, channels, and agencies. Last autumn she co-scored the four-part wildlife documentary ‘Ingenious Animals’ (OSF) which aired on BBC1. www.charlotteharding.org.uk